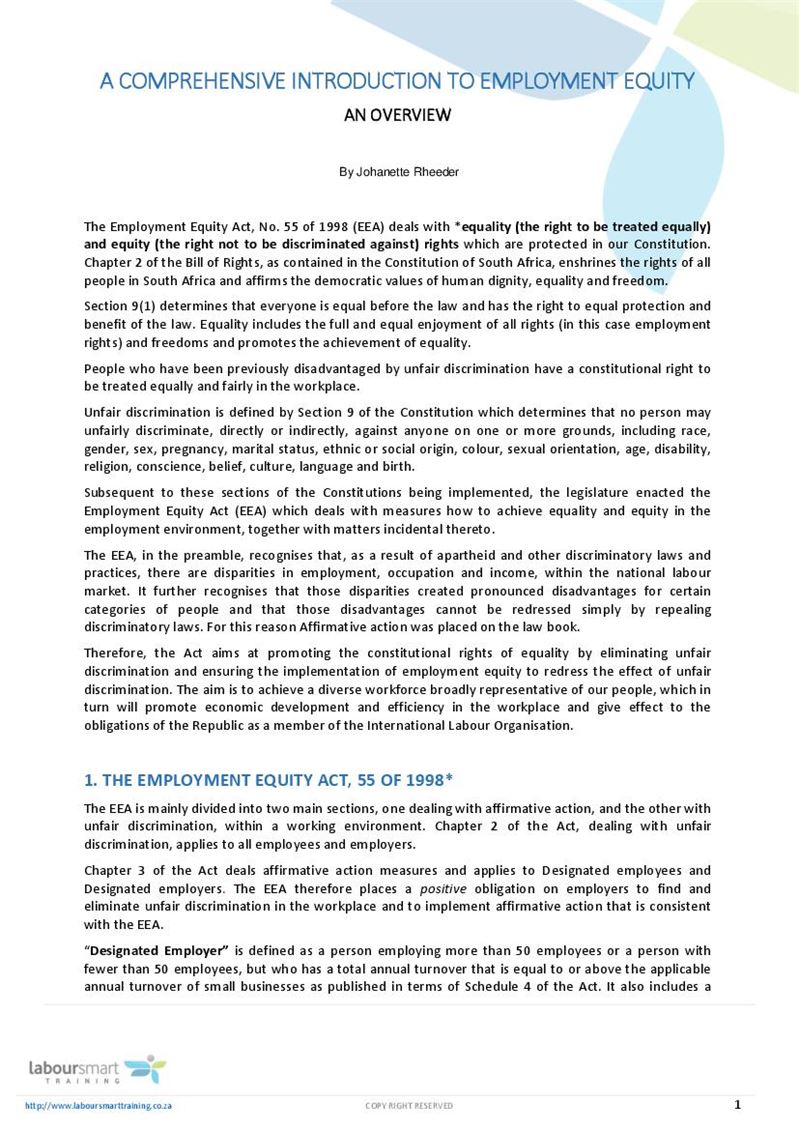 13 pages in document, you are previewing the first 2 pages below: 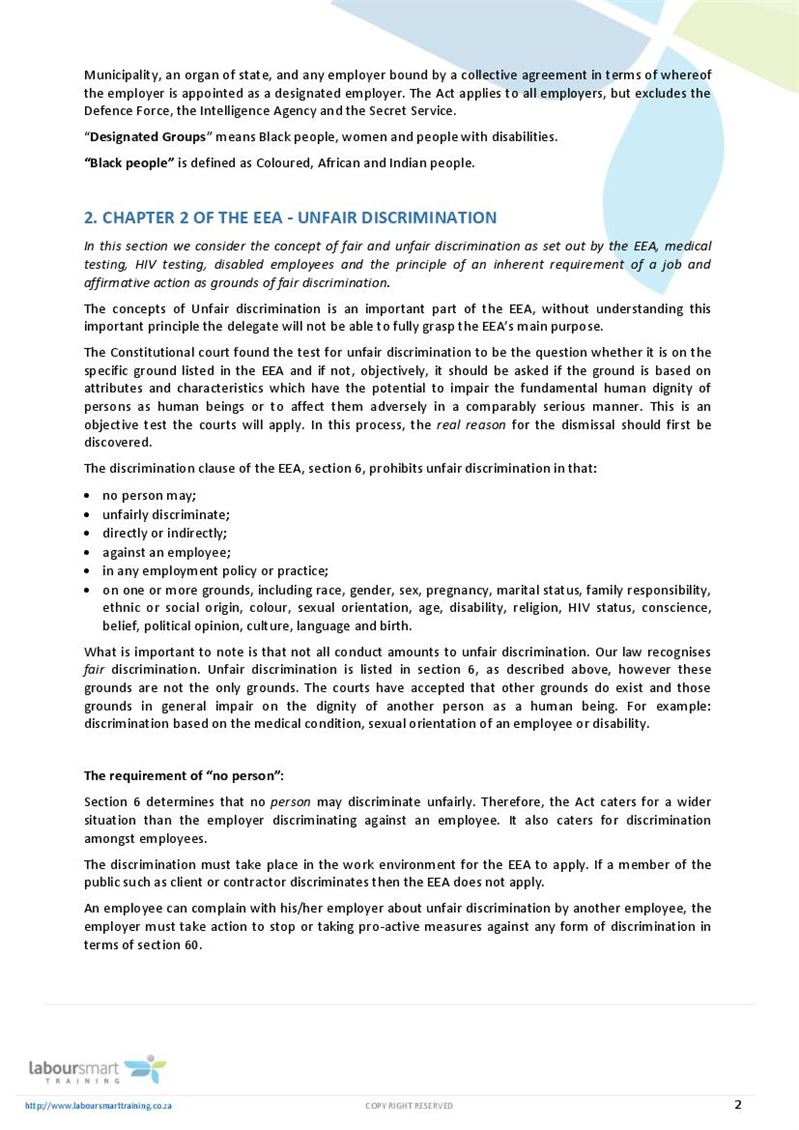 A COMPREHENSIVE INTRODUCTION TO EMPLOYMENT EQUITY AN OVERVIEW By Johanette Rheeder The Employment Equity Act, No. 55 of 1998 (EEA) deals with *equality (the right to be treated equally) and equity (the right not to be discriminated against) rights which are protected in our Constitution. Chapter 2 of the Bill of Rights, as contained in the Constitution of South Africa, enshrines the rights of all people in South Africa and affirms the democratic values of human dignity, equality and freedom. Section 9(1) determines that everyone is equal before the law and has the right to equal protection and benefit of the law. Equality includes the full and equal enjoyment of all rights (in this case employment rights) and freedoms and promotes the achievement of equality. People who have been previously disadvantaged by unfair discrimination have a constitutional right to be treated equally and fairly in the workplace. Unfair discrimination is defined by Section 9 of the Constitution which determines that no person may unfairly discriminate, directly or indirectly, against anyone on one or more grounds, including race, gender, sex, pregnancy, marital status, ethnic or social origin, colour, sexual orientation, age, disability, religion, conscience, belief, culture, language and birth. Subsequent to these sections of the Constitutions being implemented, the legislature enacted the Employment Equity Act (EEA) which deals with measures how to achieve equality and equity in the employment environment, together with matters incidental thereto. The EEA, in the preamble, recognises that, as a result of apartheid and other discriminatory laws and practices, there are disparities in employment, occupation and income, within the national labour market. It further recognises that those disparities created pronounced disadvantages for certain categories of people and that those disadvantages cannot be redressed simply by repealing discriminatory laws. For this reason Affirmative action was placed on the law book. Therefore, the Act aims at promoting the constitutional rights of equality by eliminating unfair discrimination and ensuring the implementation of employment equity to redress the effect of unfair discrimination. The aim is to achieve a diverse workforce broadly representative of our people, which in turn will promote economic development and efficiency in the workplace and give effect to the obligations of the Republic as a member of the International Labour Organisation. 1. THE EMPLOYMENT EQUITY ACT, 55 OF 1998* The EEA is mainly divided into two main sections, one dealing with affirmative action, and the other with unfair discrimination, within a working environment. Chapter 2 of the Act, dealing with unfair discrimination, applies to all employees and employers. Chapter 3 of the Act deals affirmative action measures and applies to Designated employees and Designated employers. The EEA therefore places a positive obligation on employers to find and eliminate unfair discrimination in the workplace and to implement affirmative action that is consistent with the EEA. “Designated Employer” is defined as a person employing more than 50 employees or a person with fewer than 50 employees, but who has a total annual turnover that is equal to or above the applicable annual turnover of small businesses as published in terms of Schedule 4 of the Act. It also includes a
We are preparing your download, please wait...
There was a problem downloading your document, please try again.

If you are not yet registered, please register below

All documents purchased are purchased specifically for single user use, and cannot be copied or distributed for the use of other users.

All articles are archived and might not support current legislation. Please refer to the latest legislation applicable.

All official documentation issued by The Department of Labour, and other government agencies are free and are not for sale.

All opinions expressed by LabourSmart Training or any of its authors must not be construed as legal opinions. Please contact Johanette Rheeder Incorporated or any other legal practise for consultation